I’m currently finishing up my second book, which is on African American families in the post-Civil War South. I’m specifically interested in the what families gained with emancipation and then lost to paramilitary violence. See details below.

As I await the publication of book two, I’m taking a tiny detour from my much-loved research on African Americans in the 19th century South to research the recent history of rape in Detroit and the intrepid fight against against it. Part passion project, part quest for justice, I want to understand how Southeastern Michigan went from leading the nation by securing some of the most progressive legislation to protect rape victims to so miserably failing the girls, boys, and women of Detroit. 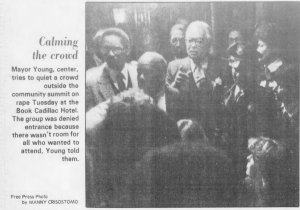 Detroit Mayor Coleman A. Young tries to calm crowd at 1984 Summit on Rape. The summit was held in response to rash of school girl rapes from September through February.

For the project tentatively titled, When the White Men Came: 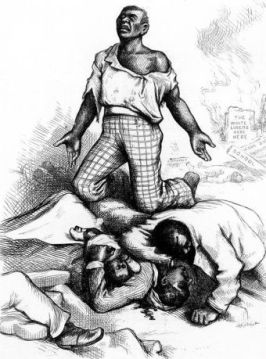 Thomas Nast’s “Is This a Republican Form of Government?” from Harper’s Weekly, September 2, 1876
Library of Congress

Historians have done a herculean job documenting postwar violence and illuminating its political, social, and sexual dimensions. I am attempting to add to this rich scholarship by excavating the ways in which African American survivors articulated their understandings of violence’s impact on their families.

As this Thomas Nast image illustrates, violence like night riding strikes inflicted a range of deep wounds on black southerners. Additionally, although men were often the primary targets of this violence and dominate much of the research conducted on the subject, Nast’s drawing echoes archival records by showing they weren’t its only victims. Whether they were present during attacks or absent, physically injured themselves or a witness to the injury of others, all family members were sucked into the violent vortex.

Transcripts of Ku Klux Klan Hearings. I combed through these records for Black survivors of and witnesses to night riding strikes from 1868-1871. 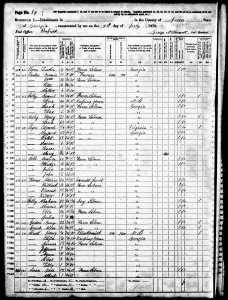 1870 Georgia Census Record of Abram Colby. At the congressional hearings, he testified to his family being terrorized and his being kidnapped and assaulted in 1869. This record provides a snapshot of Colby’s family before he testified in 1871.

My research on this project builds upon my long term interest in understanding how African Americans experienced lynching and other forms of racial violence. Using both the testimonies and census records, I am seeking to illuminate the ways in which nightriding survivors interpreted violence; how violence affected families psychologically, economically, and sociologically; and if and how families recovered. My hope is that this book will enrich our understandings of the histories of Black families after the Civil War and ways night riding compromised their stability. 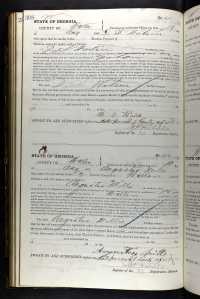 1867 Georgia Voter Oath Book record for Augustus Mills. Numerous witnesses testified to being targeted because they were voting or attempting to vote for liberal candidates who would protect their interests. Oath Books and Lists of Voter Returns such as this authenticate their accounts of voting. 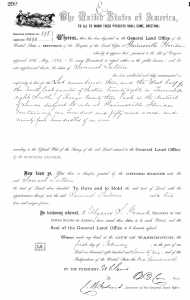 Samuel Tutson’s Homestead Record. He acquired 159 acres and 94/100 of an acre in Florida. Various witnesses were targeted because they had acquired land or they testified to being driven off it by threats of deadly violence and the refusal of local authorities to offer them protection. 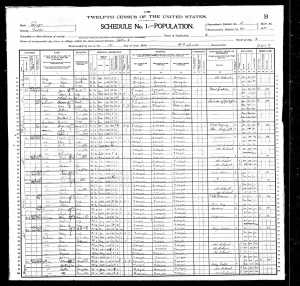 Warren Davis fled Coweta, Georgia, after night riders attacked him. He relocated his family to Atlanta where he testified at the hearings and where they still resided in 1900.

My Google Sheet for my notes from the Klan Hearings.

I created a database for WPA interviews in which formerly enslaved people recalled stories of Ku Klux Klan attacks. 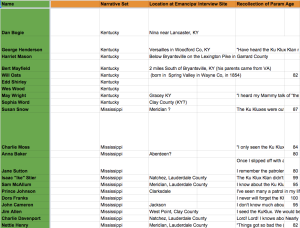 WPA data processed on a Google-Sheet.

Findings from tracking survivors in the census.

The increasing production of projects and tools visualizing history as well as an informative DH workshop at Wayne State put on by Tracy Neumann and Anelise Shrout allowed me to think about mapping my data. I’ll need to plug in stories for survivors and learn more of the fancy tools to make this more aesthetically pleasing and useful but this was a good enough start to help me think about the geography of the strikes. 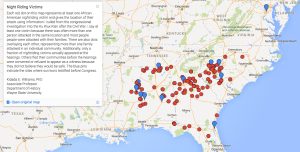 I created a map using witnesses’ accounts of their whereabouts during attacks.

With my data collection and processed, I wrote like beast.